Before the first Europeans set foot on the Piedmont Plateau [on which the Town of Cary sits in its entirety], the land was 99.5% covered by Old Growth forest. This forest consisted of many varieties of pines, oaks, maples, hickories, poplar and tulip poplar, persimmon, elm, hemlock, beech, magnolia, cedar, ash, willow, &c. 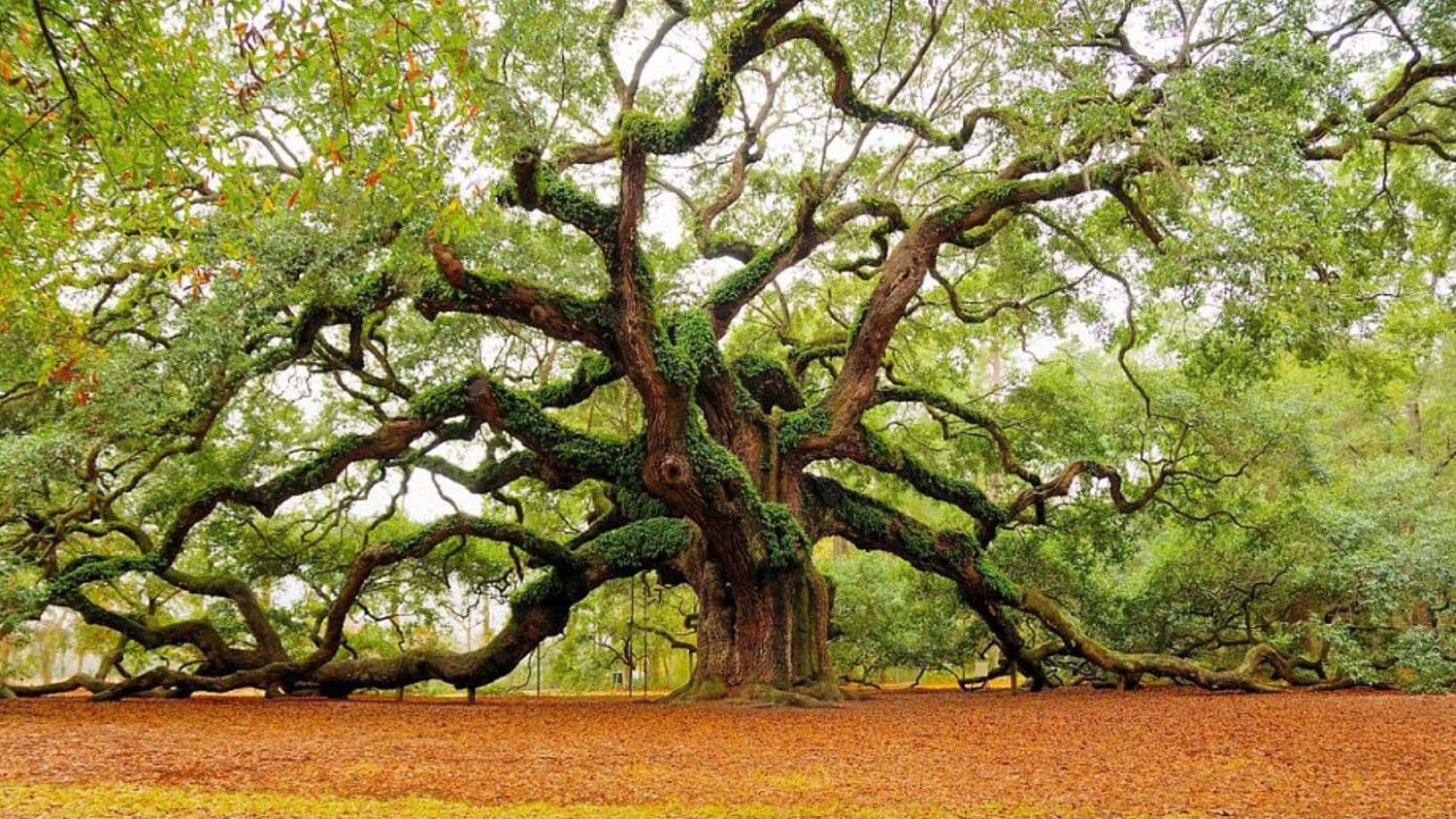 This is the Angel Oak, a Southern live oak on Johns Island near Charleston, South Carolina. It is 400 years old, and predicted to live 1,200 years. We will not see its offspring grow to this size in the Cary Tree Archive in our lifetimes. But our descendants will. (Click to expand.)

Some scholars write that the Old Growth was harvested entirely by 1750. All agree that these magnificent trees had been taken down by the start of the Revolutionary War in 1776. [In the contiguous United States, 95% of the Old Growth forests that existed in the 1600s have been cut down.] When the Old Growth was gone, they started in on the secondary growth.

The lumber was used to build the masts and planking for the English Navy’s ships, and made it possible for England to rule the seas. Huge amounts of wood were shipped north to build the great cities of the Northeast, and also for fuel to heat the buildings and homes in cold weather. Large swaths of land were stripped bare to allow for farming and the raising of livestock. When cities and towns were established, trees were clear-cut to allow for development and its inevitable expansion.

In the mid to late 1800s, it was found that the land of the Midwest was better suited for farming than the clay soils found in the Piedmont, and that larger areas of land for raising livestock could be had at much lower costs. Farms and ranches in North Carolina were abandoned or went broke and the industries shifted to the Midwest and West, and the land here was left fallow. 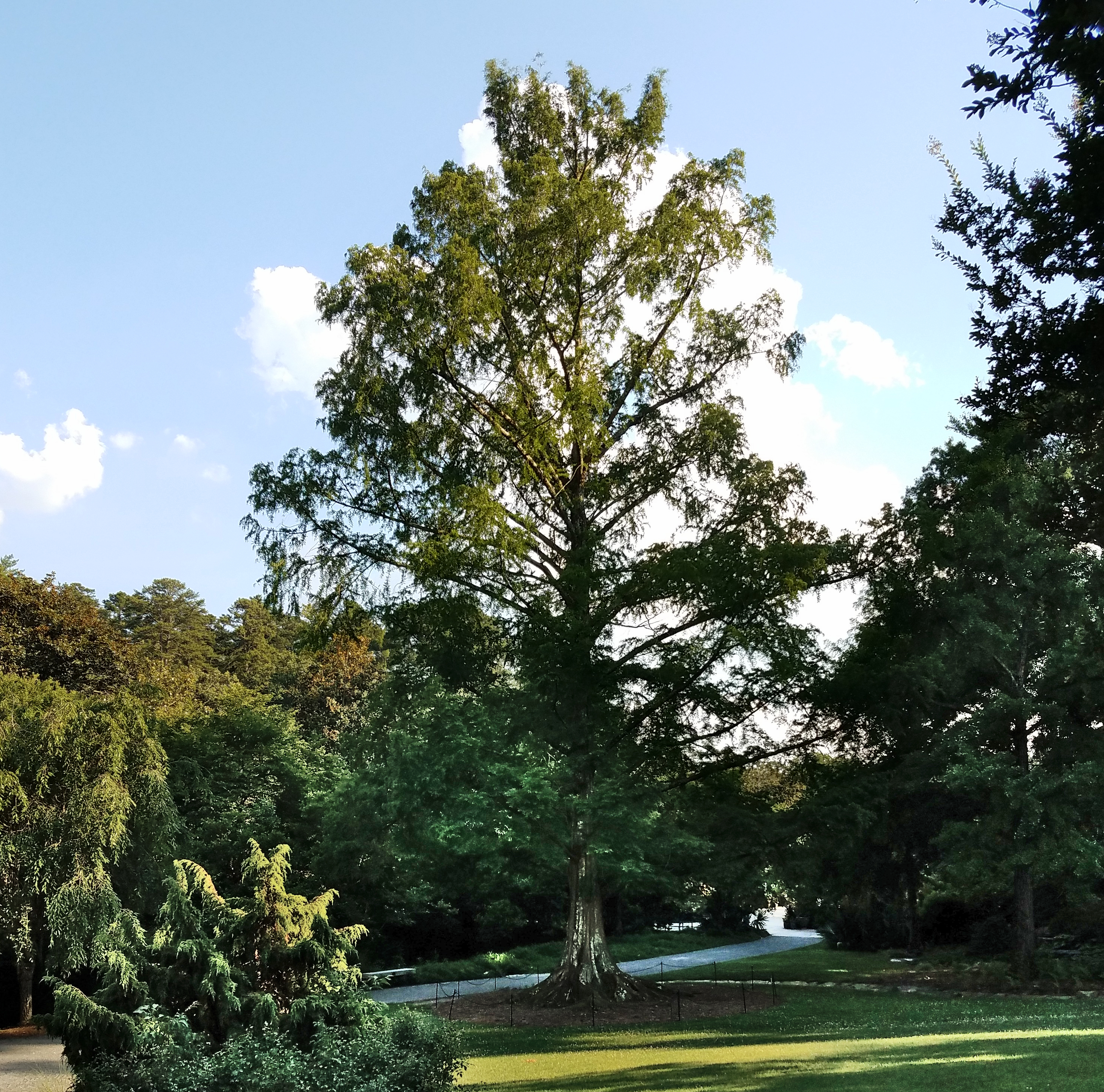 This Dawn Redwood tree is the centerpiece of the Sarah P. Duke Gardens. It was propagated from the first seedlot brought to the U.S. from China in 1947, and is one of the first Dawns to grace the Western Hemisphere in two million years. (Click to expand.)

This greatly over-simplified history of Cary’s land can at least serve as an explanation of why we now have a very large percentage of Town land covered by fast-growing Loblolly pine trees. Anyone who gardens knows that each springtime, the ground must be picked clean of the hundreds of Loblolly seedlings that volunteer to take root and grow. They grow quickly, and force out all other trees that would otherwise sprout and grow near them. With so much of the land stripped of its natural growth, nature begins her recovery by re-populating, and the first element of this centuries-long process results in the proliferation of the fertile, aggressive, and fast-growing Loblolly pine tree. The Loblolly is now by far the dominant tree in Cary.

B. W. Wells wrote, in The Natural Gardens of North Carolina, "Of unusual interest in forest distribution is the problem of the pines, especially the loblolly pine, which has enlarged its range greatly in the last seventy-five years [Dr. Wells wrote in 1932]. Originally it was dominant only in the northeastern corner of the state. At the present, following the practical annihiliation of the longleaf pine forests and the great reduction of the deciduous woody vegetations of both coastal plain and piedmont, the loblolly pine has largely taken over these areas . . . ." [p. 91].

All trees are beautiful. But some trees are more beautiful than others. We love the Loblolly pine tree, but love other species of trees a heck of a lot more. Our intention is to plant in this 7½-acre project nothing but Old Growth species. Among these will be clones or descendants of famous and notable trees such as the Liberty Tree, the Angel Oak, the General Sherman [a coast redwood], the Anne Frank Tree, the Midland Oak [grows in the precise geographic center of England], the Apple Tree [under which Sir Isaac Newton sat and watched an apple fall, which gave him the idea of gravity], the Emancipation Oak, the General Grant [a giant sequoia; designated The Nation’s Christmas Tree by proclamation of President Coolidge], the Hangman’s Elm [in Washington Square, NYC], the Lone Cypress, and similar. We will acquire clones of U. S. state-champion trees from the Archangel Ancient Tree Archive, an organization in Michigan whose mission is to “propagate the world’s most important old growth trees before they are gone.” 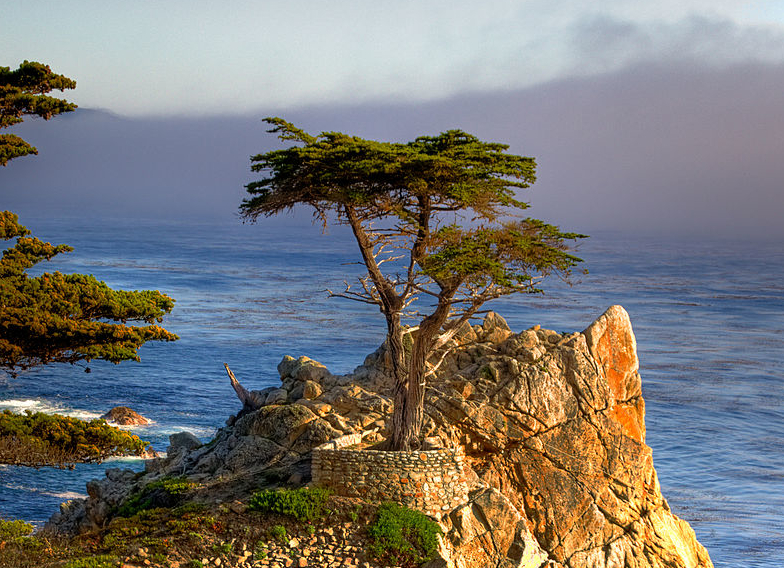 The Lone Cypress is a landmark on 17-Mile Drive on the Monterey Peninsula. (Click to expand.)

The purpose of this planting plan is to increase the diversity of the tree population of Cary and begin the tediously slow process of restoring the land to the condition it had before we began thoughtlessly altering it, and to place in bare ground trees that will be infinitely more efficient than pine trees at extracting pollution from the air, producing oxygen, sequestering carbon dioxide, absorbing rainfall to keep it from becoming runoff, and providing a place for us to reverently appreciate the spectacular natural beauty produced by our planet.

Our goal is to return this small area in Cary to the condition so elegantly described in 1932 by B. W. Wells: "The North Carolinian of today, who speeds across the open country in his fast car, can hardly imagine what his state was like when the original forest covered it. At the time Columbus was becoming acquainted with America's shoreline, the plants were in almost complete domination of this country. Over vast areas stretched the unbroken forest. On the trails through it, one could travel for days without a good view of the sun, and at night the constellations could seldom be seen because of the interfering canopy of high verdure." [Natural Gardens of North Carolina, pp. 89-90].

Reid Serozi and I will build a cell-phone application for the plot. With the number of GPS satellites in orbit recently increased to 24, and with the increase in cell-phone GPS sensitivity, it will soon be possible to locate with precision a spot on the earth one-tenth of an inch square. Thus using the app and standing next to a tree, one will be able to see information such as its species, any relevant history of its parents, the date it was planted, by whom, in honor or memory of whom, &c.

Advisors, Donors, Supporters, and Suppliers of the Archive:

Cary Tree Archive in the News